Welcome to the future of getting rid of the past

PiQo4 treats a wide range of pigment colors and its versatile energy matrix ensures effective shattering of pigment deposits. It also has the largest spot size on the market, which allows you to deliver faster treatments. PiQo4’s ability to treat a wide variety of skin conditions, including tattoo removal, provides your customers an attractive range of aesthetic solutions to improve their lifestyle and sense of well-being.

The PiQo4 brings unique technology with combination of unsurpassed advantages

Clinical studies have shown that the optimal method for shattering pigment particles is to treat them with both Nano and Picosecond laser pulses*.

First, the Nanosecond pulses are used to deliver short bursts of energy that break down the larger and deeper pigment or ink particles. Then, the area is rescanned with Picosecond pulses that dismantle the smaller and shallower particles. This combination yields far better results than using either one of the technologies on its own.

Very short laser pulses are absorbed into the target areas of the skin causing the conversion of light energy into acoustic waves that shatter the ink/pigment granules in a process that is fast and effective.The high energy levels of PiQo4 allow pigment/tattoo removal with fewer treatments compared with other competing laser systems. PiQo4 provides up to 10 times more energy for both 1064nm and 532nm (650mJ & 325mJ respectively) wavelengths. They can be set as either Nano or Pico, making them suitable for use with both, for dual pulse treatments.
*Compared to competitive systems

With PiQo4, your customers will appreciate the faster treatment results with shorter treatment sessions. PiQo4 offers up to 15 spot sizes, ranging from 2mm to 15mm, the largest uniform spot size in today’s aesthetics industry and almost four times larger than that of the closest competitor.PiQo4’s larger spot sizes allow deeper maintenance of penetration into the dermis and better dispersal of the pigment or embedded ink particles. Studies have demonstrated that treatment with a large spot size at low fluences significantly decreases any occurrence of blistering, discoloration or scarring* on the skin’s surface, since the energy is being spread over a wider area.
*Brown, Mussarat, Hussain & Goldberg. Cosmetic and Laser Therapy, 2011 13:280-282

Since each pigment color absorbs a specific wavelength, PiQo4 offers 4 wavelengths in order to treat the broadest range of pigment/tattoo colors, on the widest range of skin types. Its four wavelengths – 1064nm, 532nm, 650nm and 585nm – target 9 of the most frequently used tattoo colors ranging from light orange to dark black. With PiQo4 you can erase the rainbow. 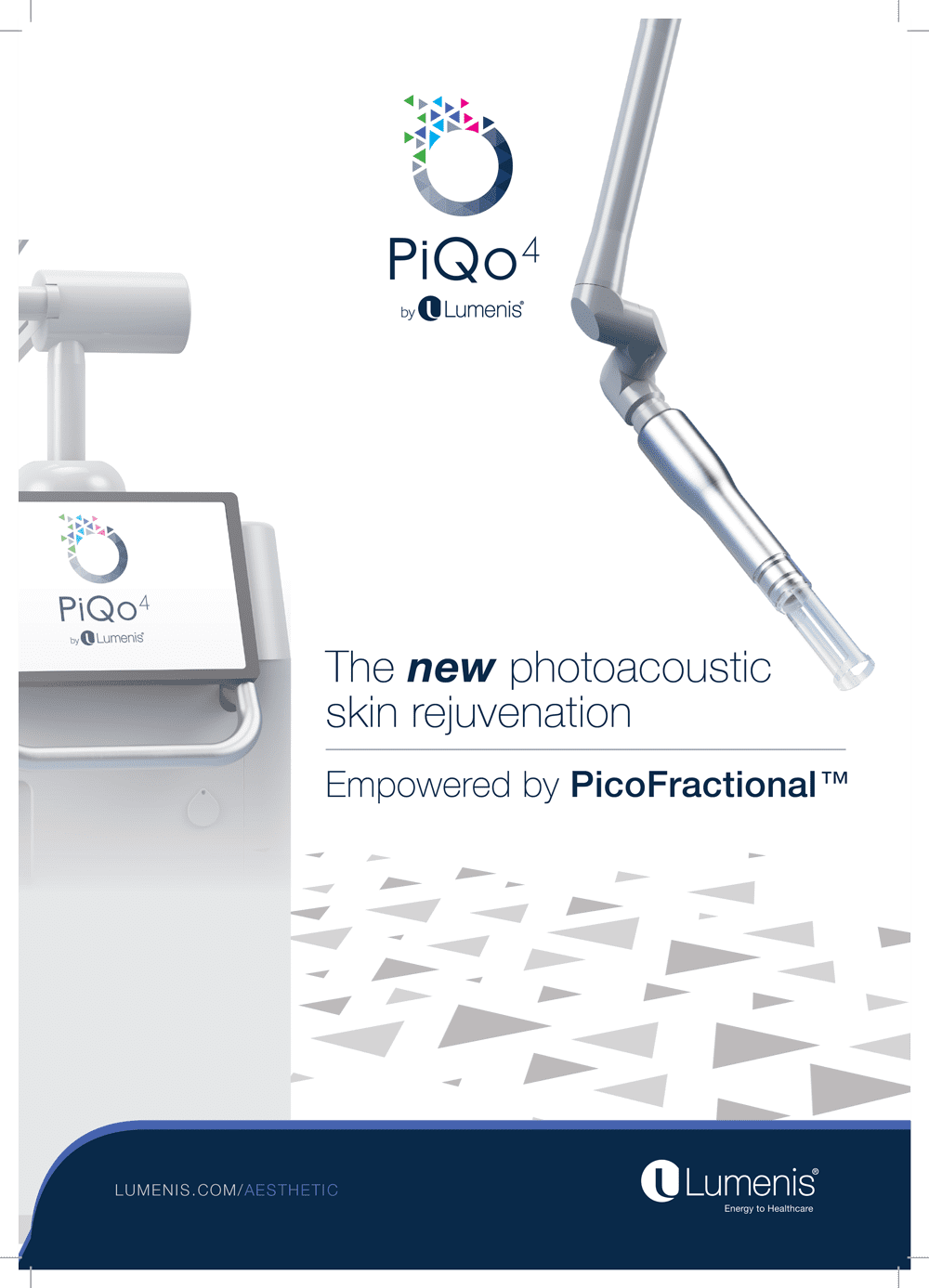 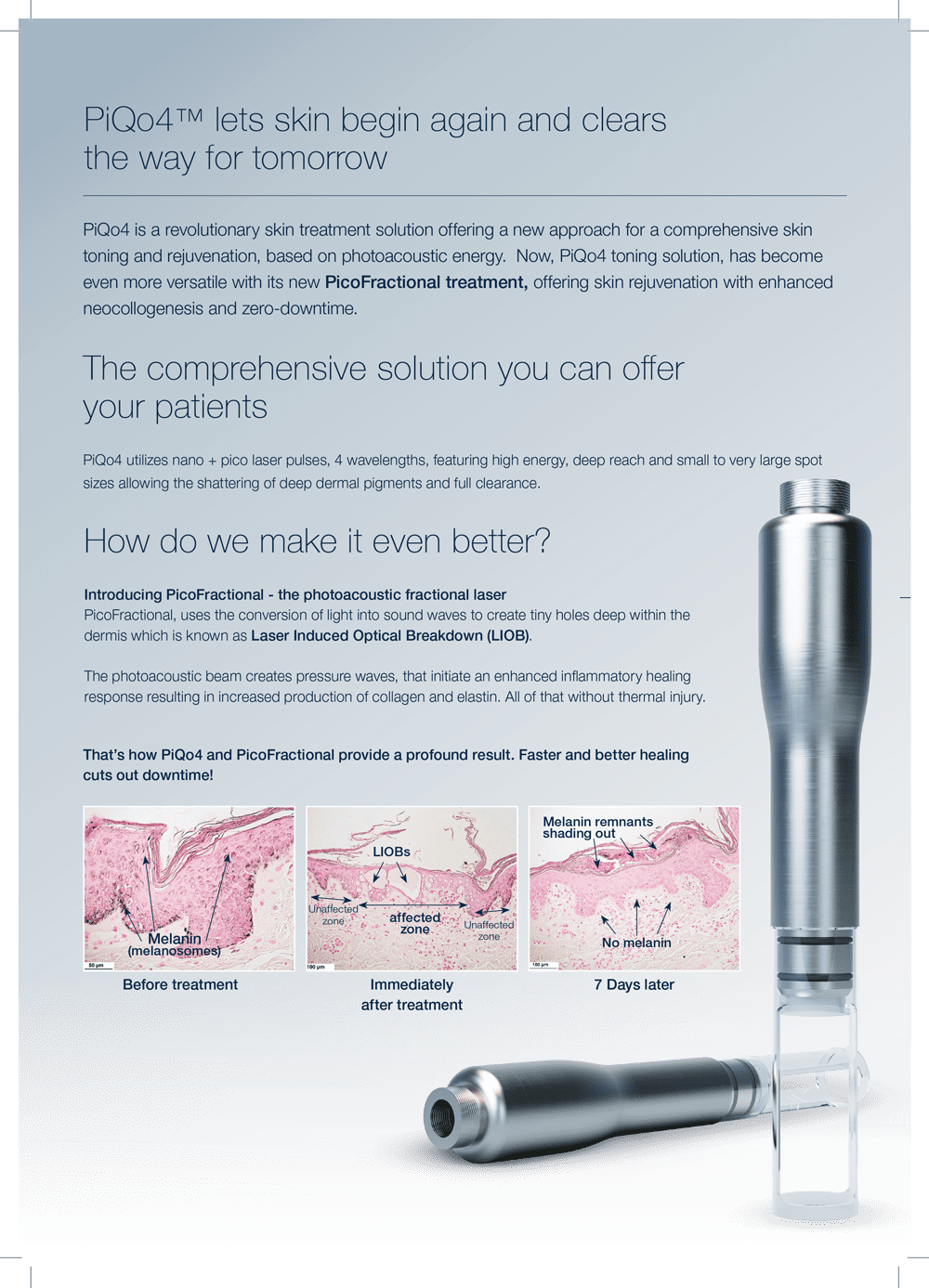 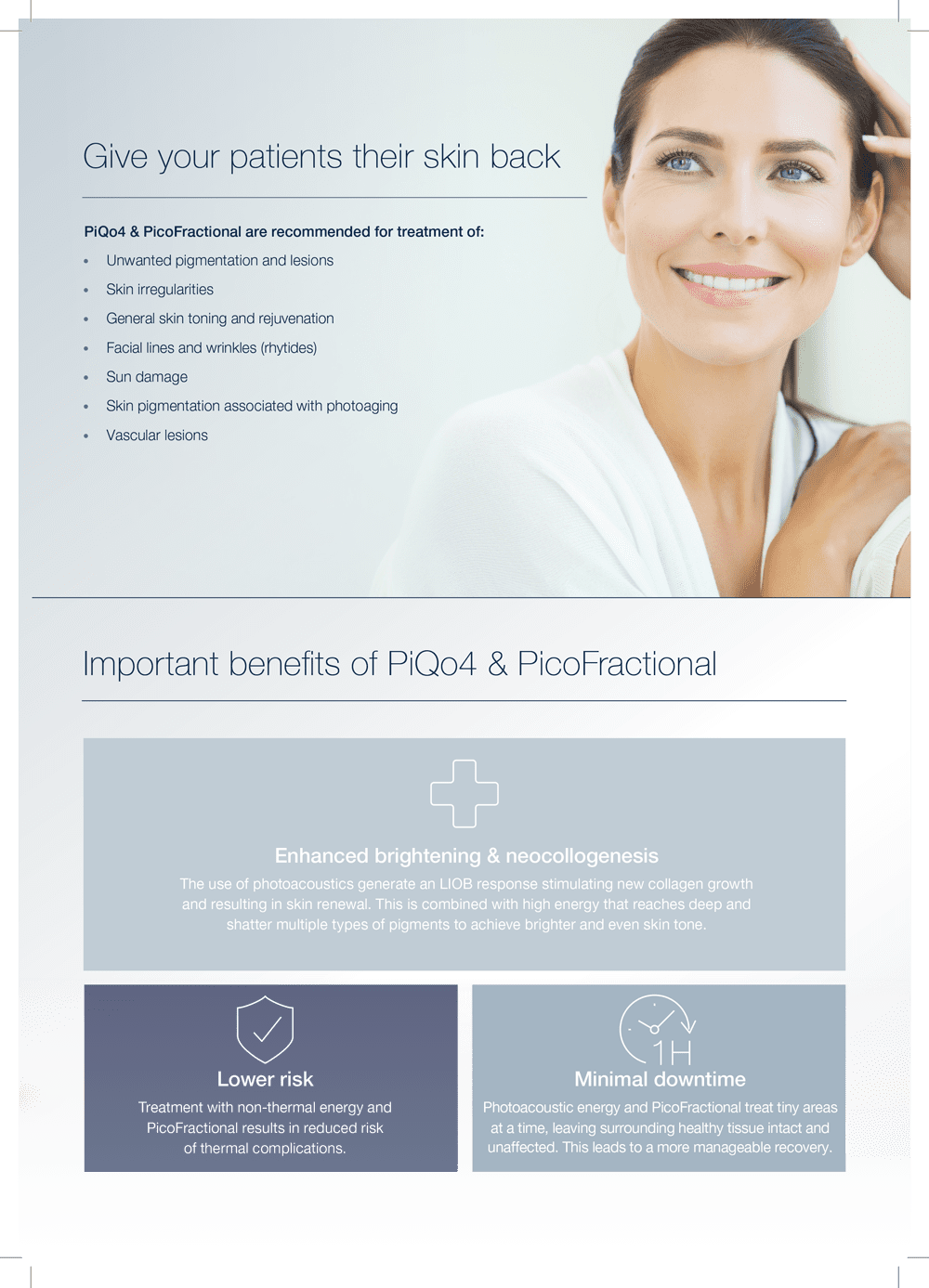 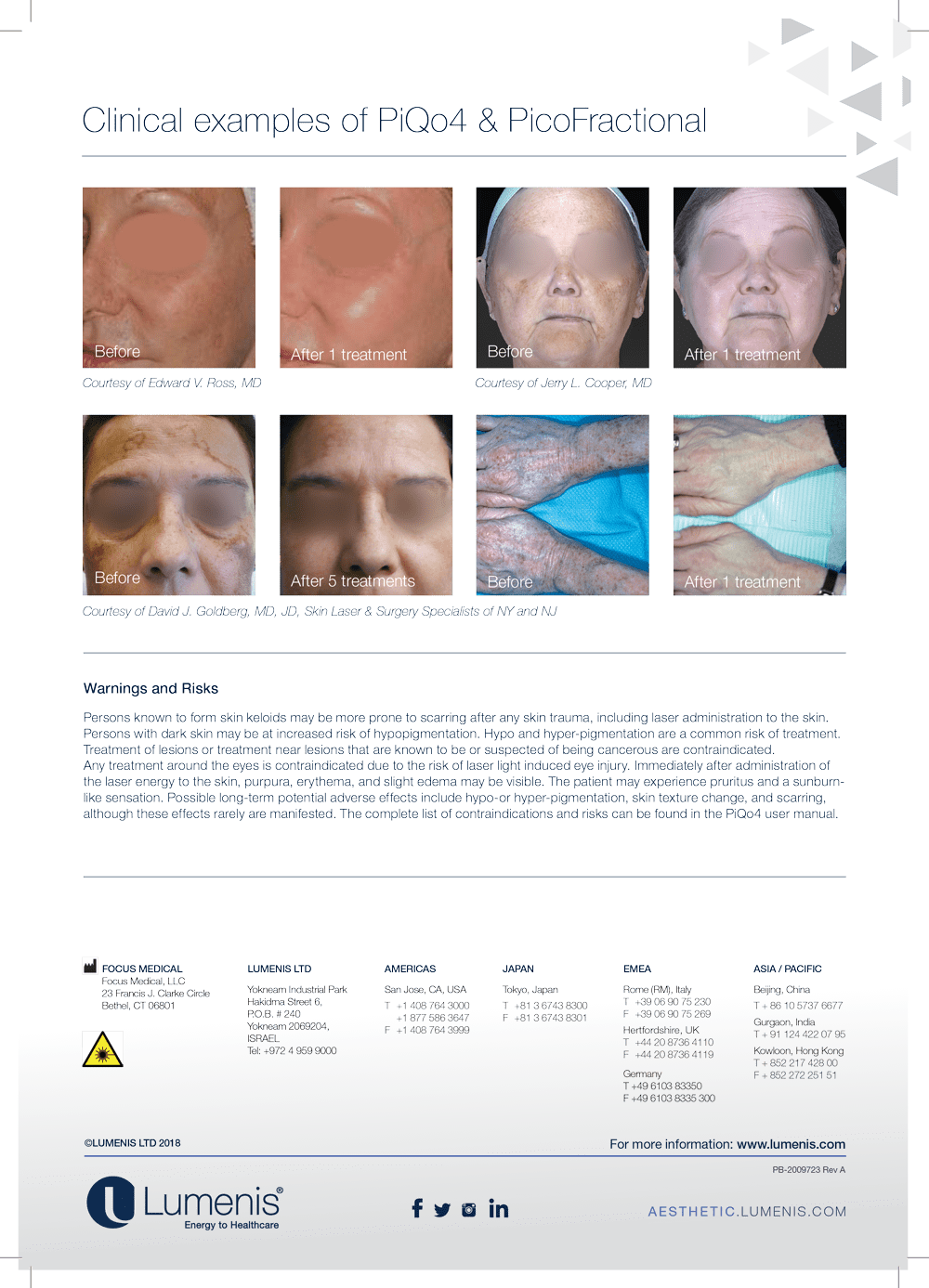 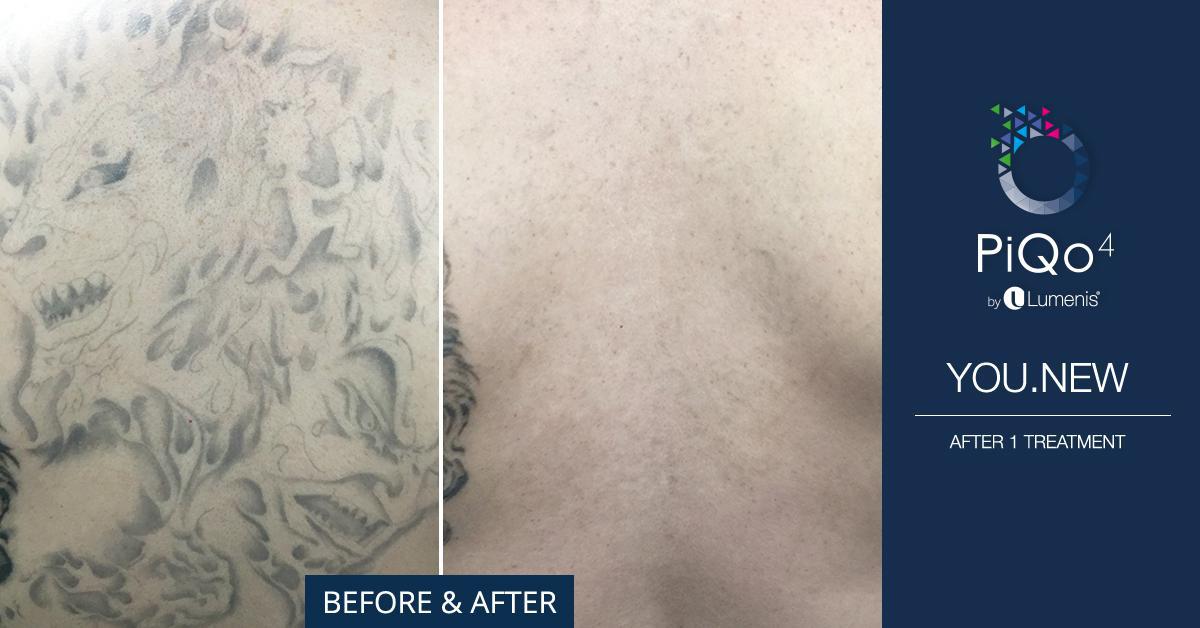